The Department of Writing & Rhetoric Studies invites all to attend out Alumni Panel event. The event will take place on November 14th at 3:00pm located on campus in the CTIHB Jewel Box. Come learn about what it's like after graduating with a Writing & Rhetoric degree.

We have four guest speakers, Nate Blouin, Holly Langton, Collett Litchard, & Shauna Edson. They are coming to discuss what life is like after graduation, how their job searches went, and where they are working now. 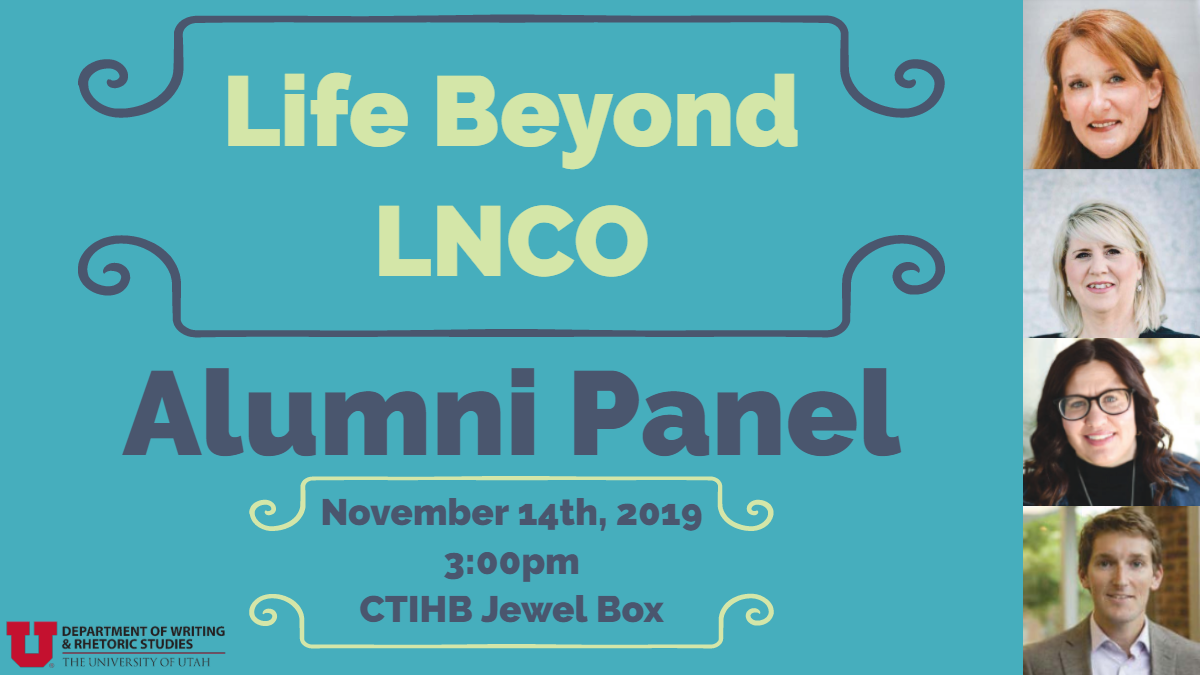 Nate Blouin graduated with a BS from the Writing and Rhetoric Studies program in 2017. While enrolled, Nate served as a policy fellow for a gubernatorial campaign and developed a passion for political engagement. He then worked as the first staffer on Jenny Wilson’s campaign for US Senate, where he managed policy and communications duties. His interest in politics shifted to a focus on building stronger public sector institutions, and he decided to pursue a Master of Public Affairs degree at Brown University, which he completed during the summer of 2019. While at Brown, Nate studied policy analysis and public administration with a focus on nonprofit organizations. He worked for Generation Citizen, a civics education nonprofit new to Utah, identifying opportunities for growth in the state while overseeing classroom programming and legislative advocacy. Since returning to Utah in July, he has kept busy by serving on the Salt Lake County Open Space Trust Fund Committee, the SLCC Alumni Leadership Council, and as chair of the Utah Outdoor Caucus. Nate recently helped one of Salt Lake City’s mayoral candidates draft her policy platform while searching for the next step in his career.

Shauna is the Digital Inclusion Coordinator at The Salt Lake City Public Library. She leads the Library’s digital inclusion initiative, the Tech League, and works with library staff and community partners to create long-term digital inclusion programming in the communities the Library’s eight locations serve. Shauna is a contributing author to Tech For All: Moving Beyond the Digital Divide (2019), and has spoken nationally and internationally on digital equity, digital literacies, and digital storytelling. She serves as the Chairwoman for Utah Communities Connect: Utah's Digital Alliance, NDIA Fellow, and an Associate Instructor at the University of Utah.

Holly Langton has worked in public policy for over fifteen years. She is currently the policy analyst for the Governor’s General Counsel. In this position, Ms. Langton is primarily responsible for reviewing legislation and administrative rules. She is a member of a three-person team that advises Governor Herbert and senior staff regarding legislation and other regulatory issues. She also acts as a liaison to state agencies and members of the legislature on administrative rulemaking issues and proposed legislation— researching issues and coordinating strategies to resolve regulatory questions.

Collett Litchard is a Grant Analyst with the Utah Governor's Office, Commission on Criminal and Juvenile Justice. The motto “Improve the Process” drives the success of her 20-plus-year career. She received a Bachelor of Writing and Rhetoric Studies from the University of Utah in 2017. She will earn her Master of Strategic Communication from Westminster College in May 2020. She is a former military spouse who enjoys studying physics and writing creatively in her free time, all while rocking out to her favorite bands. Her latest fangirling venture includes learning enough Korean to sing along with her favorite BTS songs.